Exotic Paris: Go around the world without leaving the capital

Paris is a world capital in many ways. The city has seen the meeting of peoples, the mingling of various traditions, and it keeps the imprints of these influences from the five continents. Going around the world without leaving Paris is an adventure accessible at the price of a metro ticket or a few steps away. Architectures and gardens of foreign inspiration, flavors and perfumes from elsewhere, the city of light offers a multitude of spots to connect to the four corners of the globe without losing sight of the Eiffel Tower. These places are so numerous that we will not list them all, but a handful of them hold our attention especially ... fasten your seat belts, take off immediately!

Cults from here and elsewhere

"Paris is worth a Mass," said the sovereign Henry IV. To celebrate it, Paris has Notre Dame, but not only. Since 1861, the French capital is the seat of the Archdiocese of the Russian Orthodox Churches in Western Europe, with the Saint Alexander Nevsky Cathedral. The Byzantine-Moscow style church bears witness to the Russian presence in France since the end of the 18th century. Its characteristic apses are surmounted by arrows adorned with golden bulbs, themselves capped with the eight-pointed Russian cross. Here no gargoyles, yet you are in the 8th arrondissement of Paris.

More famous perhaps, the minaret 33 meters high of the Great Mosque of Paris was erected in 1922 according to models of buildings in North Africa. Parisians know they will find in the shadow of his Hispano-Moorish architecture the best mint tea in the capital. After having accompanied your beverage with some oriental pastries in the famous tea room, why not enjoy the hammam, the visitor can glimpse the prayer rooms, then visit the patio, before strolling in an Andalusian-inspired garden. White marbles, multicolored columns and zelli

ges, oriental palms and carpets: past the cedar doors of Lebanon, the change of scenery in the heart of the 5th arrondissement is guaranteed.

For even more distant spiritual journeys, one can also discover the Great Pagoda of Vincennes and its Buddhist temple Kagyu Dzong. This Zen refuge is home to the largest gold-covered Buddha in Europe, donated by Thailand. On the other side of Paris, it is the Hinduism which is in the spotlight, near the La Chapelle metro station: welcome to the neighborhood nicknamed "Little Jaffna" where reign Indian and Sri Lankan cultures. It is between the saris shops and the Tamil grocery stores, that is located Sri Manicka Vinayakar Alayam temple dedicated to Ganesh. The elephant-headed deity, son of Shiva, is celebrated here in September, during a grand and colorful parade. 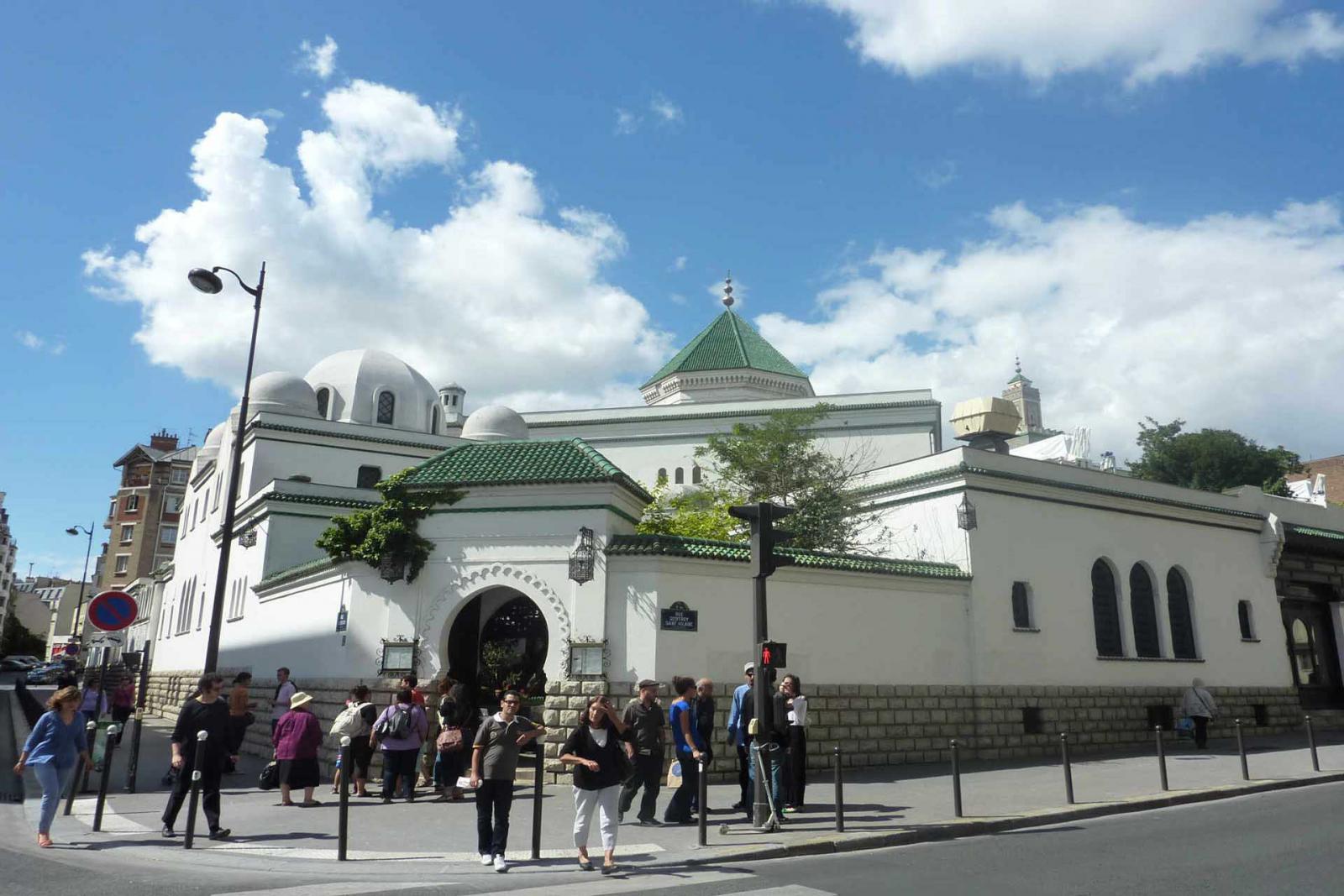 Among the few lush greenery in the great metropolis of Paris, there are a handful of gardens out of the ordinary. The largest of these is the Jardin d'Agronomie Tropicale, in the Bois de Vincennes. This green space inaugurated for the colonial exhibition of 1907 reopened its doors to the public in 2006. It allows to observe what remains of the pavilions of African or Asian inspirations, in the heart of a vegetation dotted with some tropical plants.
Preferable is the park of the Albert Kahn Museum. The former property of the traveling philanthropist groups English, French and Japanese gardens around the museum. An island between two decks of red wood, cherry blossoms, bamboo and pebbles, even the carp are not lacking: it's like being in the land of the rising sun.

The Heidelbach Hotel garden at the National Museum of Asian Arts - Guimet, in the 16th arrondissement of Paris, also reflects the art of the Japanese-style garden in an idealized natural way. The best time to visit is spring, when traditional tea ceremonies take place in a dedicated pavilion built by master carpenter Yamamoto Takaaki. 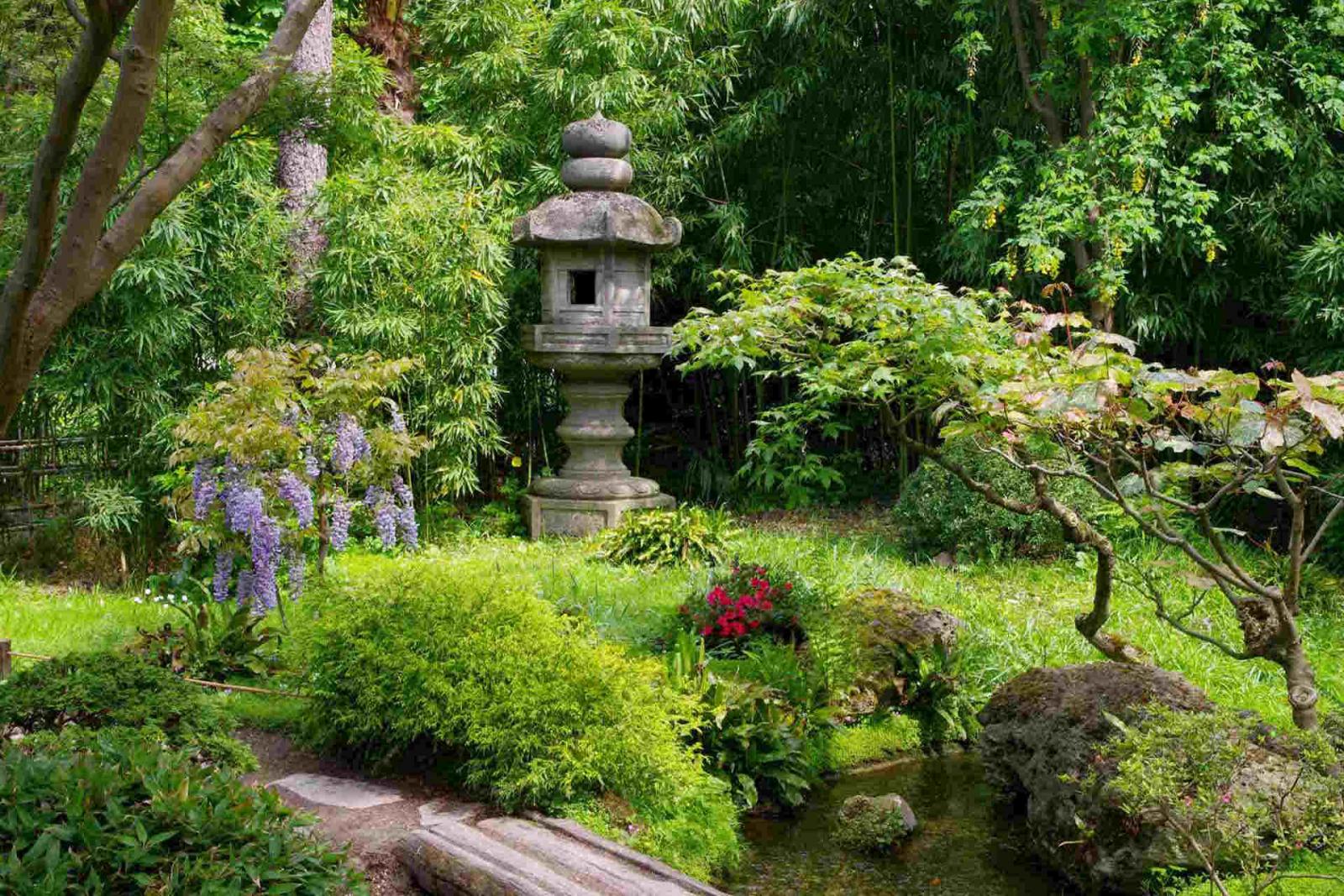 Of these unusual places that dress Paris with a touch of exoticism, we will not forget to mention the Cité Universitaire Internationale. We already hear all the languages ​​of the world leaving the station RER Cité Universitaire, since this campus welcomes 12000 students from 140 countries. They are fortunate enough to be housed in some forty buildings designed by big names in world architecture (Lucio Costa, Le Corbusier, or Claude Parent). Here all the national styles are mixed with the Houses of Iran, Korea, Japan, Argentina, or the College of Spain.
Isolated in the 8th district, and all the more spectacular, Maison Loo surprises the onlooker with its red walls. The Chinese-inspired pagoda, former private mansion of an art dealer nostalgic of his country, M.Loo, is now a private museum, which offers exhibitions and salons abled to be privatize. The opportunity to discover an interior decoration as exotic as the surprising facade. 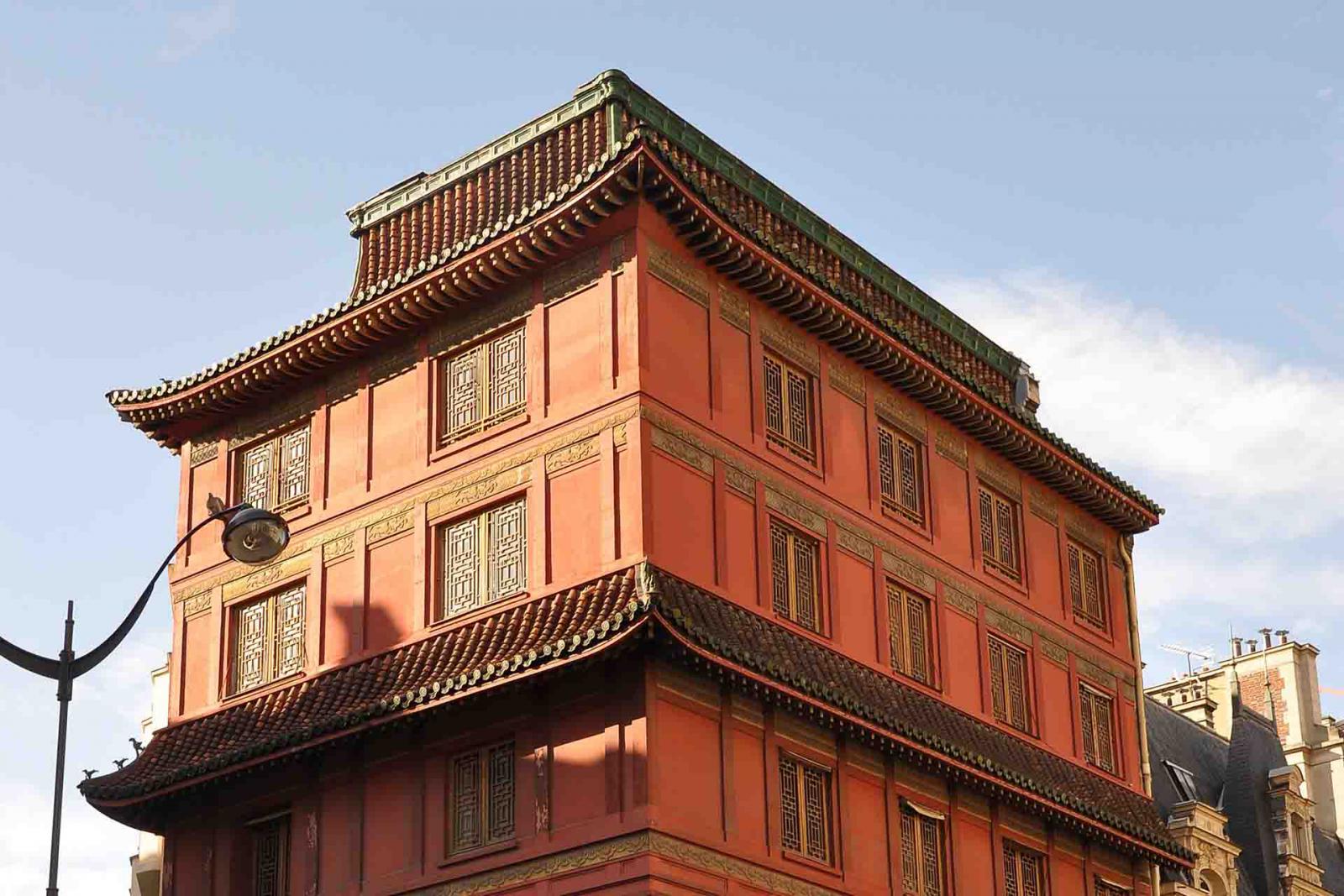 Flavors from far away

Of course, restaurants are not lacking in the world capital of gastronomy. But when you want to change flavors for your taste buds, where to dine in Paris? Of course, to enjoy fine Asian dishes and discover that there is not only spring rolls and sushi in life, Parisians are familiar with the Rue Sainte Anne in the Opera district for the best Japanese restaurants, or the Avenue de Choisy in the XIIIth district "China Town" for the most authentic Chinese cuisine. Falafel lovers will go to look for food in the Marais. Want to taste a real Malian mafé? The district of La Goutte d'Or, metro Château Rouge, is full of grocery stores specialized in African products. On the lookout for perfumes from India? It's Passage Brady where you’ll find them. This "Little India" hides behind its colorful frontages the most spicy spices.

Off the beaten track and those neighborhoods where you will be spoiled for choice, Paris also has many tables that blend almost incognito into the Haussmann landscape: Vietnamese, Thai, Mexican, Argentinian or Peruvian cuisine all found their place not far from the Seine. Among these good addresses of exotic restaurants in Paris, we have tested for you a reference in Indonesian gastronomy: the well named Indonesia, located near the Luxembourg Garden. Behind an almost secret entrance, one discovers a bamboo decoration adorned with puppets and masks evocative of the cultures of the volcanic archipelago. The national dishes that are served here such as nasi goreng (fried rice) or sate ayam (chicken skewers with peanut sauce) will transport your senses to Yogyakarta or Ubud, to the sound of a traditional gamelan ... we believe it! 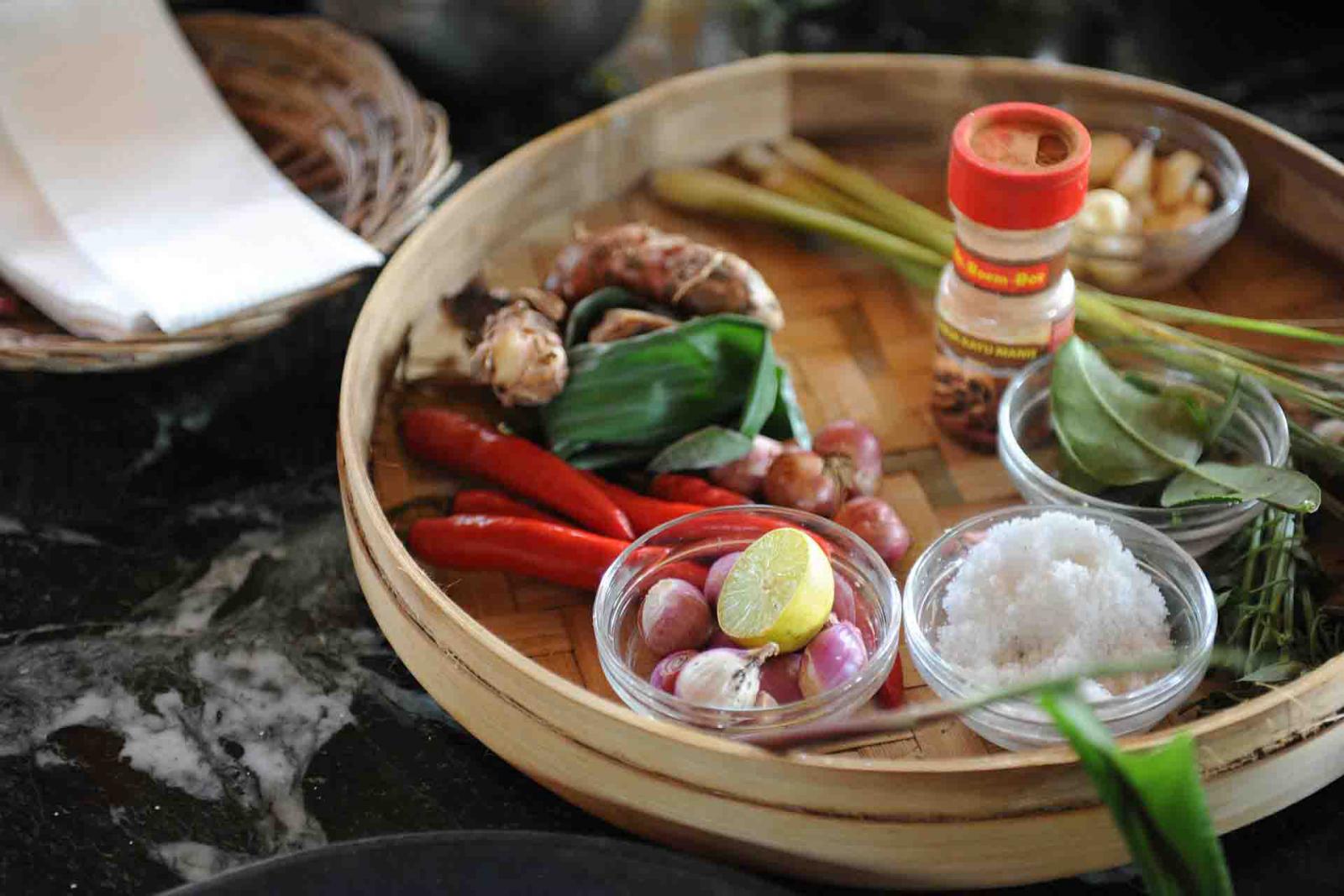